The youngest Halfling Commando made it off Snowy Korthos Island yesterday!!!

Panda, previously known as She who makes us Drink,  and my cleric, Geekmom Mommybot TM, took off into the explorer area to finish Korthos.  We had three quests left to do: Sacrifices, Redemption, and Misery’s Peak.  We have been running  quests on Normal.  I did not want it being difficult for Panda.  I want her to enjoy the quests and get used to running her character.

I took my laptop downstairs and positioned myself on the couch behind her while she was playing on my computer.   This allowed me to be able to hop up and help her if she needed.  It also allowed me to watch where she was and how she was keeping up. 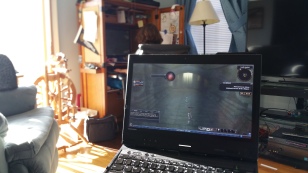 We started off to Redemption.  She helped with the valves to shut off the blasts protecting the Cannith Crystals.  She got a bit turned about heading towards the tunnels where Heyton was hiding.  Note to self, turn up my gamma when she is running on my computer to make it easier for her to see in the dark.  We dispatched the Sahuagin quickly and convinced Heyton to help Korthos.

We moved on to Sacrifices to go save Arissa.  She helped free the additional prisoners.  I had opened the levers and had to step back and let her to do the rest.  Geekmom is a little too used to Korthos speed runs.   Got to the traps.  On Normal, they do not do much damage so I just told her to run through.  She said that she had an idea.  She timed the blade trap and got through without damage.  Go girl!!!   We ignored the Arcane skellie to avoid the Mario jumping for her.  She freed all the prisoners and sent Arissa on her way home to Daddy, the Mayor of Korthos.  Turned in all our quests and repaired.

We took a break for me to cook dinner and everyone because Pink insisted that she had no idea of how to run a cleric.  Personally, I think she is refusing anything to do with being a cleric.  We then had dinner before heading off to rid Korthos of the dragon that has been besieging it.

We met the companions at the entrance to Misery’s peak and then went our separate ways.  It was a fun romp through the tunnels.  She would kill the fleshies while I turned the undead.  Always fun to turn undead at the lower levels.

I taught her to go for the casters first, then archers, while I handled the undead.  It worked well.  Many cries of “Go for the Minions!!!!” and “Get the casters!!!”  were heard in our house.

Got to the part where you first see Aussircaex in all her glory when the adventurers get her attention.  Panda wanted to fight the dragon.  Later, little padawan.  Later.

I had her stop when we were running over the ice sheet so that I could hop until and show her Aussircaex running under the ice below.  The excitement and joy was awesome.  Those types of moments in the game make DDO awesome.  Especially when seeing for the first time.  Very cool to see through her eyes. 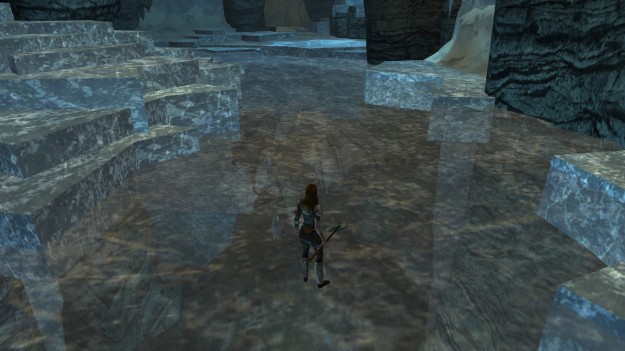 If you look closely, you can see Aussircaex’s wings

Finally, we completed the run to find the MindFlayer and Dragon locked in a battle of wills.  We took our positions around the Quori Mindsunder and waited for our chance.  She could not hear the battle of wills with Darastrix Achthend.  She was worried that the sound would cause anxiety so she left my headset off.  We got the signal and destroyed the Quori Mindsunder.  We then watched Aussircaex take her revenge on the MindFlayer as Darastrix Achthend shattered into pieces.  We met up with Jeets, that tricky rogue, and then joined the rest of the group with Heyton.  We then took the Dimension Door out of the quest and got our lovely XP.

She was excited when she zoned out of the quest and saw that the splash-screen had a sunny Korthos instead of the snowy one that she was used to seeing.  She quickly turned in her end reward and took the ship out of Korthos.

I sent her an invite into the Halfling Commandos guild and took her on the airship.  She keep trying to stop at every quest giver between the docks to take their quests, but I told her to wait.

She was very happy to get off of Snowy Korthos.  I think that our next plan is to head into Cerulean Hills and visit Baudry Cartamon to help him out in the warehouse.

People I am following

Confessions of a Geek Mom

Confessions of a Geek Mom

Rebelling against a culture that values assimilation over individuality.

Notes on collections at the RIHS

The Order of Syncletica

strangers but once
Micki's Delirium

Builds, Characters, and Commentary for Dungeons and Dragons Online

Funz and failz in DDO... and beyond!

Progressive Views on the News

The latest news on WordPress.com and the WordPress community.